About the Artist Edit

At an early age it was pretty apparent that drawing was what I was good at. I had all the necessary skills; hands, eyes, and an incredibly compulsive personality that assured I would spend days on a single drawing until I thought it was perfect. Growing up, I spent nearly all of my spare time drawing my favorite cartoon characters with my older sister. We would draw them on rolls of butcher paper, sometimes up to 4 feet tall, challenging ourselves with the long task of coloring the entire image. Three years my elder, my sister instilled me with a strong, and sometimes obsessive, sense of competition. I was compelled to color better, faster and more "in the lines" than any child should.

By my teenage years I had moved onto comic books, a passion I still hold dear. I spent every cent of my allowance on those artists I admired so much. I would redraw all of my favorite panels, often times creating my own comic books. By this point, I was certain that I was going to be an artist when I grew up. My parents, however, took a little more convincing.

My local high school sponsored a program called "Careers in Art". The program placed students in a weekly internship with a design company or working professional. It was through this program that I met my long time mentor. Through him I learned the basics of illustration, and thus decided to choose that as my major when I would enter college.

After convincing my parents to help me pay for art school, I attended the School of Visual Arts from 1996-2000. Having only done one painting prior, it was there that I honed those skills and came to love the traditional art of oil painting. Once again, I thrived on the competition, some of the best the country had to offer. I graduated the top of my class with a B.F.A. degree in Illustration, and received that years "Special Achievement" award in my major.

After graduation, with some scholarship money in my pocket, I embarked on what would quickly turn into my career. I started painting portraits out of my parent's basement. Eventually, I was making enough to rent a studio. I found a gallery to represent my fine arts, and starting pursuing my dream of becoming an illustrator.

His illustrations have graced the #1 spot on the New York Times Best Seller list numerous times. Aside from freelance illustration, Dan also co-hosts a series of instructional demonstrations called 'Art Out Loud'. ~ The Art of Dan dos Santos : Bio

Dan has been the recipient of many awards. Recently, he has received a 2010 Silver Medal from Spectrum, the 2007 Jack Gaughan Award for Best Emerging Artist, and was the Chesley Award winner for Best Paperback Cover of 2007. ~ The Art of Dan dos Santos : Bio

Sue the Zombie T-Rex from The Dresden Files series 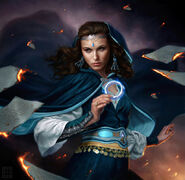 Naked City: Tales of Urban Fantasy ~ Anthology
Add a photo to this gallery

Wild Side, The anthology
Add a photo to this gallery 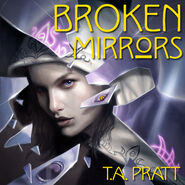 7. Vengeance of the Demon (2015—Kara Gillian series) by Diana Rowland—Art: Dan Dos Santos
Add a photo to this gallery