Seanan McGuire was born in Martinez, California, and raised in a wide variety of locations, most of which boasted some sort of dangerous native wildlife. Despite her almost magnetic attraction to anything venomous, she somehow managed to survive long enough to acquire a typewriter, a reasonable grasp of the English language, and the desire to combine the two. The fact that she wasn't killed for using her typewriter at three o'clock in the morning is probably more impressive than her lack of death by spider-bite.

Often described as a vortex of the surreal, many of Seanan's anecdotes end with things like "and then we got the anti-venom" or "but it's okay, because it turned out the water wasn't that deep." She has yet to be defeated in a game of "Who here was bitten by the strangest thing?," and can be amused for hours by almost anything. "Almost anything" includes swamps, long walks, long walks in swamps, things that live in swamps, horror movies, strange noises, musical theater, reality TV, comic books, finding pennies on the street, and venomous reptiles. Seanan may be the only person on the planet who admits to using Kenneth Muir's Horror Films of the 1980s as a checklist.

Seanan lives in a creaky old farmhouse in Northern California, which she shares with her three cats, Lilly, Alice, and Thomas, a vast collection of creepy dolls and horror movies, and sufficient books to qualify her as a fire hazard. She has strongly-held and oft-expressed beliefs about the origins of the Black Death, the X-Men, and the need for chainsaws in daily life.

Seanan was the winner of the 2010 John W. Campbell Award for Best New Writer, and her novel Feed (as Mira Grant) was named as one of Publishers Weekly's Best Books of 2010. In 2013 she became the first person ever to appear five times on the same Hugo Ballot. ~ from: Seanan McGuire: Biography

Mira Grant (aka Seanan McGuire) won the John W. Campbell Award for Best New Writer. It was awarded to her for the novel ‘FEED’ at Aussiecon’s Hugo Awards ceremony last Sunday in Melbourne. 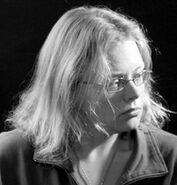 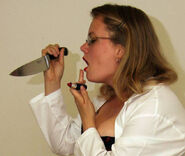 4.5. "Through this Hous " in Home Improvement- Undead Edition (2011) edited by Charlaine Harris